Reflection on ‘HARRIET’ by Board Member Gretchen Cook-Anderson

On Tuesday, November 12, thanks to the generous support of the The Boston Foundation, USES hosted a screening of ‘HARRIET’ for families and friends of USES. The film was followed by a panel discussion, led by President & CEO Maicharia Z. Weir Lytle, on being a woman of courage and carrying Harriet Tubman’s legacy into the 21st century in our continued fight for freedom.

Thanks to panelists Reverend Irene Monroe, Marie St. Fleur, and Frieda Garcia for their amazing words of inspiration and insight following the impactful film, and to board member Gretchen Cook-Anderson for her powerful closing remarks, which you can read in full below. 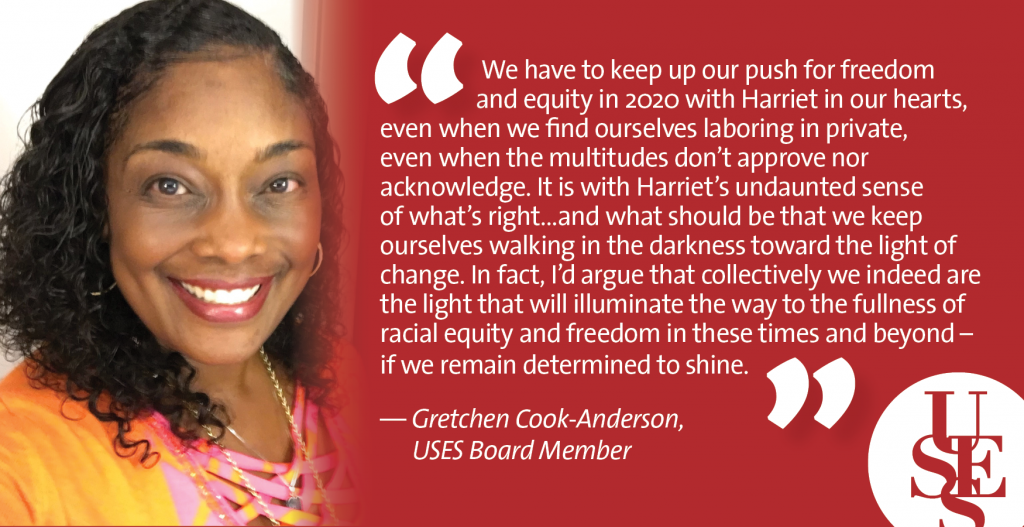 First, I want to thank our very own women of courage who have shared their feelings about and tributes to Harriet Tubman through their thoughts on service to one’s community, through their thoughts on the actions of self-sacrifice that it almost always takes to advocate and work toward greater racial equity and the true realization of the rights and freedoms afforded us by law.

It’s an honor to be here to humbly share some closing thoughts and to be among women who are pushing, nudging, demanding change, and who in their own ways, are carrying Harriet’s torch in these contemporary times. For that, we express our heartfelt thanks.

I am a proud native of Harriet Tubman’s home state of Maryland. I often remind friends on social media that I’m a #MarylandGirlInABostonWorld. I’ve walked the fields near Brodess Farm where she spent most of her childhood. I’ve driven down the lonely Bucktown Road in the Eastern Shore town of Cambridge that leads to the old store where Harriet was permanently injured when she stepped in the way of an iron thrown to punish a young boy. I’ve spent time roaming the rich, green landscape in a part of Maryland that is far more Southern than not, still thick with large trees, twists and turns of pathways and ups and downs in its terrain — wondering what it must have been like for a young Harriet fleeing the burden of slavery by herself. It’s beautiful land but land that also echoes with the pain and heartache of its history. But, what has struck me most on summer nights in that area is the stillness and the darkness. I can hardly imagine how Harriet navigated that degree of darkness – the actual darkness of the nights and the darkness of slavery that had fallen upon our country, that wreaked so much havoc on the enslaved and unknowingly too on the enslavers that its impact reverberates even now.

Speaking of moving through darkness like Harriet, it’s common that women of courage do just that and have done just this for generations. Women, in particular, women of color, have often tirelessly summoned courage and resolve to go to battle on half of our communities without fanfare or spotlight, focused and dedicated on making change, sometimes one person at a time.

If you work through that kind of darkness too, whether in your daily efforts or at times, please be encouraged. I wanted to leave you with words Frederick Douglass penned to Harriet Tubman on August 29, 1868:

“The difference between us is very marked,” he said. “Most that I have done and suffered in the service of our cause has been in public, and I have received much encouragement at every step of the way. You, on the other hand, have labored in a private way. I have wrought in the day – you in the night. I have had the applause of the crowd and the satisfaction that comes of being approved by the multitude, while the most that you have done has been witnessed by a few trembling, scarred, and foot-sore bondmen and women, whom you have led out of the house of bondage, and whose heartfelt, “God bless you,” has been your only reward. The midnight sky and the silent stars have been the witnesses of your devotion to freedom and of your heroism.”

So, ladies, it’s with the midnight sky and the silent stars as our witnesses that we, just like Harriet, must navigate and remain determined with every step to do what we do, how we do it and for whom we do it. I believe we all have a bit of Harriet in us, and our own proverbial north star that guides our steps and provides us a prize ahead on which to keep our eyes. We have to keep up our push for freedom and equity in 2020 with Harriet in our hearts, even when we find ourselves laboring in private, even when the multitudes don’t approve nor acknowledge. It is with Harriet’s undaunted sense of what’s right…and what should be that we keep ourselves walking in the darkness toward the light of change. In fact, I’d argue that collectively we indeed are the light that will illuminate the way to the fullness of racial equity and freedom in these times and beyond – if we remain determined to shine.

Thanks to each guest here tonight for honoring Harriet’s story and legacy by joining us, for telling others about her as a significant American icon, and for the ways in which each of you is striving to make a difference – for your family, for Boston’s South End and surrounding communities, for our country and our world.

On behalf of the USES board and staff family, I want to express how much we appreciate you, and we wish you a safe night.

Harriet Tubman has a unique connection to USES; the original Harriet Tubman House, located on Holyoke Street in the South End, was a settlement house for African American women moving to Boston from the South to seek better opportunities for themselves and their families. Harriet Tubman was the Honorary President of the organization, which provided women with shelter, skills training, and a supportive community as they adjusted to their new environment.

We honor Harriet Tubman by working to disrupt the cycle of poverty and by providing an opportunity for our most generous supporters to join a giving circle dedicated to her legacy. Membership in the Harriet Tubman Society is open to individuals who donate $1,000 or more each year.

Harriet Tubman’s legacy is about advancing opportunity and addressing inequality. She has shown us that one woman, driven by her values and vision, has the power to forever change the world.

We hope you join us in making that change. If you would like to become a member of the Harriet Tubman Society, please visit this page or email our Director of Development, Colleen George, at cgeorge@uses.org for more information on how to get involved.