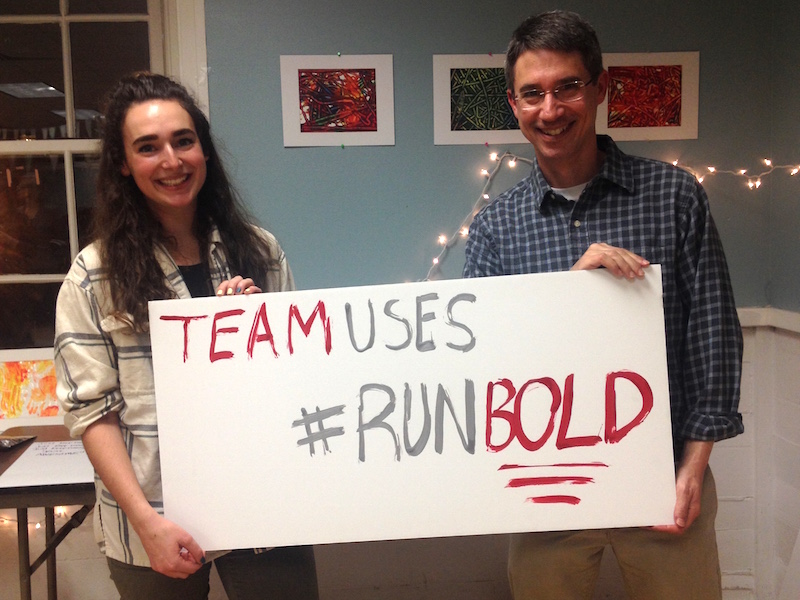 United South End Settlements is proud to announce our two Team USES runners for the 2016 Boston Marathon: Becca Bagdigian and Derek Lessing! They are helping our neighbors “run toward success” by raising $15,000 for USES by race day on April 18, 2016. To support Team USES, visit our Boston Marathon fundraising page.

Derek and his wife Catherine Thut have lived on Rutland Street since 2010, just a few doors down from USES’s Children’s Arts Centre. Derek grew up in West Virginia, went to graduate school in California, and is a research biologist at Massachusetts General Hospital. Derek and Cathy have been supporters of USES for years, but training and fundraising for the 2016 Boston Marathon marks the beginning of a more active involvement in USES activities.

Becca is from Stow, MA, where she lived until 2013 when she moved to Boston to study Architectural Design at the Massachusetts College of Art and Design. She first became involved with USES through Camp Hale, where she has been a camp counselor and lifeguard for two years. She also was a Group Leader with the After School Program this past summer. In high school, Becca started to run long distances with the dream of someday running the Boston Marathon. She couldn’t be more excited for the opportunity to run as a part of Team USES!

USES is proud to be an official non-profit partner with John Hancock for the 2016 Boston Marathon. Welcome to the team, Derek and Becca!