Event Report: A Moment in Time 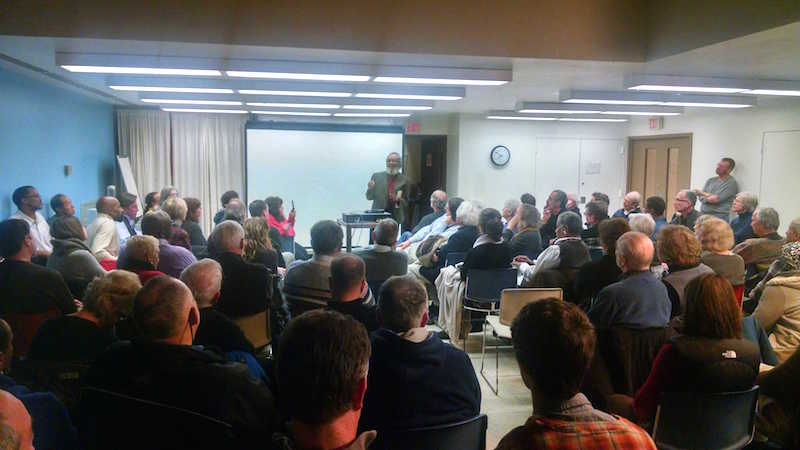 You would never have known that it was a cold, mid-January evening with freezing rain mixed with light snow based on the view in the Lincoln House Room at the Harriet Tubman House. Over 100 people gathered to view a film, shot in 1977, about the changes and urban renewal that were underway in the South End at that time.

The film, Neighbors: Conservation in a Changing Community, presented the situation from a variety of perspectives and featured comments from people active in the community such as Mel King, Helen Morton, Chris Hayes, Marlene Stevens, and Harry Dow. (Watch a preview below.)

Through today’s lens, the South End captured in the frames of the film was almost unrecognizable. There were many images of blight and neglect, but there were also powerful images of the people and diversity that made the neighborhood beautiful and rich. One line from the movie summed it up well, paraphrased, “the South End was not a slum. A slum was a place where no one cared about what went on. That was not true of the South End. There were people who cared.”

At the conclusion of the film, State Representative Byron Rushing did a marvelous job of moderating a discussion between those in the room. He began by polling the room in two ways:

There was a fair bit of nostalgia for what had been lost in the changes that took place at the time the film was made and in the years since. There were some amazing stories shared along with a recounting of the influences that were at work during that age. The story of a near mugging until the mugger realized whom he was mugging and the story of youths on the basketball court in what is now Ringgold Park being told by a tall Lebanese man that they needed to look out for his son were a couple of the most memorable and funny.

Not only has the physical landscape changed in many profound and symbolic ways, (captured in the film as the wrecking ball tearing down a building near the corner of West Canton and Shawmut where a massive mural painted by Chris Cato’s brother once hung) but the more important human element had also dramatically changed. We saw interviews with people from the Middle Eastern that has all but disappeared from the neighborhood. Representative Rushing interjected historical points along the way and did a masterful job of bringing a diverse range of voices into the conversation.

During the discussion, Chris Cato, Fred Dow, and Ken Kruckemeyer each made outstanding remarks. (As USES Board members, they really did us proud!)

Chris spoke passionately about some of the titans in the community and how they had a profound impact on his and others’ upbringing. He also spoke about the importance of activism at that time and how the neighborhood needed to reach back to this heritage to tackle the challenges we face today. He invited and exhorted those present to get more involved with USES as we work together to address the issues, many of which are similar to those from 1977.

Fred added an immense amount of depth to the discussion by reminding everyone that beyond the physical landscape of the neighborhood, human capital was an extremely rich and important part of what made the South End a special place.

Ken shared a story reinforcing the interconnectedness of the residents and the South End experience across generations and geographic distance. For example, there were people back in that time living on Holyoke Street who had heard first-hand accounts of their relatives meeting Harriet Tubman. There was a collective pause and a little gasp as all of us absorbed the full weight of that fact.

The night flew by in what seemed like an instant. It felt intimate and local and inspiring and energizing. Co-sponsored by the Ellis South End Neighborhood Association and the South End Historical Society in partnership with USES, the evening is exactly the sort of community event we hope to see more of in the future.