Community Colors 2014, now on view at the Harriet Tubman House at 566 Columbus Ave., is a collaborative art exhibit of work inspired by community, diversity and/or collaboration. It features works created by local artists who live, work or participate in our South End/Lower Roxbury community. To learn more about the gallery artists, check out the artist statements below: 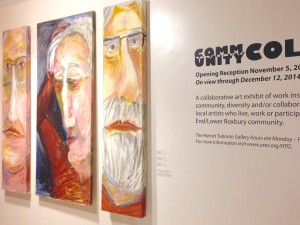 Carol is a South End artist who collaborates, curates and produces mixed media works. The three pieces in this exhibit are from a series entitled: Why the Long Face?

As a figurative painter, Carol is interested in the stories of the people on the street. The long faces characterize the struggle of each individual, deep in thought, working through problems and worries that they encounter in their everyday lives.

Salome is a Jamaican born, African-American artist who is self taught. Her multimedia art is informed by her spiritual and religious beliefs. She finds inspiration through her study of animism, mysticism, petroglyphs, hieroglyphs and talismanic works. Sound and movement therapies encompass the unison of the natural world and have led Salome to explore topics of the cosmic and supernatural existence into the Celestial Soul. Salome has a long history of personal and creative giving in the South End.

Dexter’s work is primarily about relationships between forms, shapes, colors, symbols and signs that explore concepts of identity, self and group determination. The work that Dexter puts forward graphically illustrates unity between different elements to reveal the beauty of the whole while symbolically deconstructing known concepts and to create new gradational understandings. 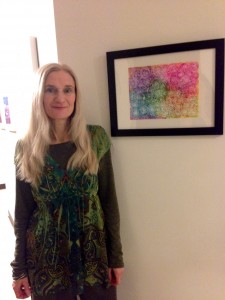 Elizabeth’s work represents metaphysical energies. Each circle can be an individual person in a group, or a circle can be a group itself. The overlapping colors are the overlapping membership in several groups simultaneously. Different colors represent diverse energy vibrations. Similar to stars, the white dots are the energies we send out to others, impacting others into the infinite beyond. Using pastel and bright clean colors, Elizabeth idealizes our spiritual communications to each other. Her work is influenced by West Coast Chumash rock paintings, Australian Aboriginal art, archaeology and medical anthropology.

Painting for Harikleia is a visual meditation in form, color, and space. From the first strong impulse to the last consideration, it’s a response to the beauty of light moving over a form, illuminating the land or absent in shadow. This joyful, Impressionist rendering of what she sees visually, as the color of light, connects to what she sees inwardly—to memory, stories of people and place, to things deeply felt and understood. Such as the South End, where Harikelia’s grandparents once lived at Union Park, to now, where she works and paints. You can view Harikleia’s portfolio online at www.harikleiastudios.com.

“Luminary” is a collaboration by two artists, Dominick Takis and Hope Ricciardi. Dominick started this canvas with his rich textures in a palette of greens and ochres, then Hope painted the figure in oil from a live model, adding the Armenian lace patterns. This work is part of a series, “OYA” that is informed by Hope’s Armenian ancestry and Armenian history. Oya, Armenian lace making, is passed down through the generations of women. The final work references the architectural ruins of Armenian culture, the patterns of Armenian lace and the inspiration of Armenian women.

Elisa was born in Paris and now lives and works in Boston’s South End. After working for different interior design agencies, she decided to set up her own company and created Picrobulle. Working with watercolor, ink and pen, Elisa’s goal is to capture the mystic and symbolic components of architecture and its raw materials such as wood, stone and glass. Each monument has its own spirit and her approach is to understand it and deliver it. Architecture is about rationality and functionality but there is also dream. 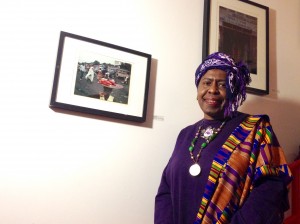 J. L. McRath completed a photography course at the Boston Center for Adult Education and shares photographs from her 1975 Africa stay. Her goal is to bring audiences common cultural and historical elements of the community, an object, or an event, which are elusive and/or outside their immediate perceptions. As some situations will never manifest again, she captures “critical moments” so others can experience the time/places that she deems worthy of conveying a message.

Jean is a poet and textural abstractionist who builds multimedia and multidimensional wall constructions. Her approach toward art stems from a strong love of the power of abstraction. The fact that a painting can represent nothing in particular and yet works its way into people’s memories and strongest emotions when gazed upon. She believes that people need to get past the storyline to come to a point of true relaxation and peace. In today’s hectic world, she believes that everyone deserves a way to reach a peace within themselves. She creates paintings as positive catalyzers toward that goal. Learn more at www.ParadisArt.com.

Zen has been making art since age 12. He studied and exhibited in Scotland, Italy, France, Belgium and in Boston at the Piano Gallery, and the South End Library. He was a guest artist at USES’ Children’s Art Centre and has shown and given art talks at Susan Bailis, and cafes in the Boston area. While in Boston he began developing his own contemporary painting style. Zen has taught many students and currently loves working with apprentices. He feels a duty to pass on the knowledge he has gained and to give opportunities to those who want to learn. His work is influenced by his stay in the South End and a fresh interest and exploration of geometry.

Melissa is inspired everyday by the community of preschool artists she works with and learns alongside. This piece is a representation of the South End as it becomes more and more of a home to her, and more and more an inspiration. When Melissa walks around, she sees the towering buildings that pierce the sky and confirm her position. Around her are the homes that hold the hearts and culture of the South End, whose windows offer a look into the collective, sometimes ambiguous, always colorful background of the neighborhood.

Paula lives in the South End in a pocket of Harrison Avenue wedged between the fire station, police station and BU Medical, where community is found over tapas at Estragon, or growing vegetables alongside neighbors in a community garden. When she walks through the South End, it always feels a little like opening presents. She might find salsa dancers on a summer night, or a tai chi group in early morning. But always, always, Paula finds something beautiful, something that captures her artistic imagination and makes her love calling this place home.

Sara’s recent work forms a collection that suggests, creates, explores, and exploits relationships. Using a variety of media, she prods the motives and feelings that are often unsaid, but can weigh heavily on friendships and romantic relationships. The works call on the viewer to hypothesize about and engage with the subjects. The absence of the implied characters opens the pieces up for a variety of interpretations. With each new viewer, a new relationship is realized, between the viewer and the subjects. The scenes she depicts are intended to have a suggestive quality, hinting at the circumstances from which they arise.

As an artist Theresa-India Young has been blessed with visual sensibility and creativity. She believed art is about patience, discipline, visualization, feeling, and doing. It is interdisciplinary, holistic, spiritual, and creative. Theresa viewed creativity as how we express and share our varied sensibilities, perceptions, and cultural experiences. It is not limited to painting on canvas, making pottery, or the aesthetics of one particular person or culture. Art, like culture is evolving, changing, growing.