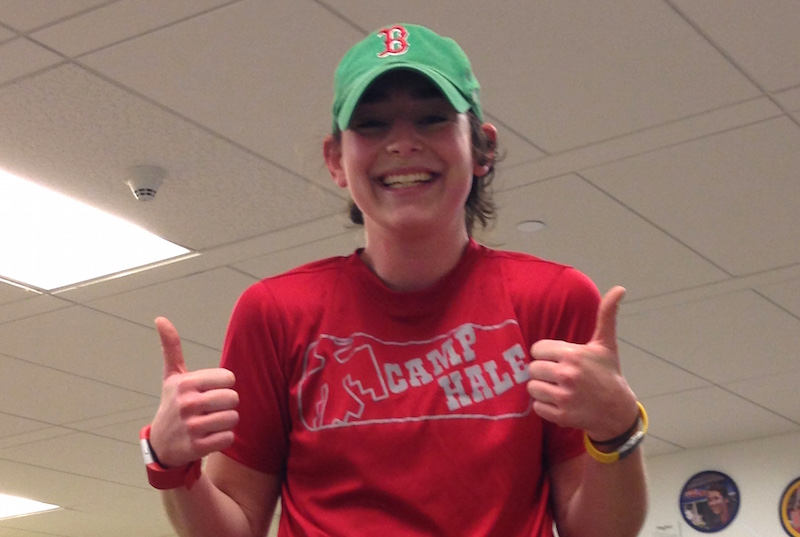 Boston, Mass – Rebecca Bagdigian, Camp Hale counselor and lifeguard, will be running the 2016 Boston Marathon in support of Camp Hale and United South End Settlements (USES). As one of two runners on Team USES, Becca’s goal is to raise $7,500 by race day.

Camp Hale seeks to instill confidence, responsibility, and leadership in campers. Through challenging physical activities, campers learn what they are truly capable of accomplishing. Becca tells us, “Sometimes campers hit a wall on a hike or during the mile swim, and say ‘I can’t keep going. I look them in the eye and encourage them to scream ‘I can!’ Even when you feel like you’ve got nothing left in the tank, you are always stronger than you think.”

“On my long marathon training runs, my mind wanders into the ‘I can’t’ territory. When this happens, I think of my girls at Camp Hale telling me ‘Miss Becca, YOU CAN!’ and it never fails to give my legs the strength I need to finish.”

Becca is from Stow, MA, where she lived until 2013 when she moved to Boston to study Architectural Design at the Massachusetts College of Art and Design. In addition to her involvement at Camp Hale, Becca was also a Group Leader with USES’ After School Program this past summer. In high school, Becca started to run long distances with the dream of someday running the Boston Marathon. With a handful of half marathons already under her belt, she is ready for the challenge.

“Even as a counselor, Camp Hale has given me more self-confidence and courage than I could ever have imagined,” said Becca. “My campers all possess so much more bravery than I had at that age, and they inspire me to face my fears as they face theirs. I’ll no doubt be thinking about my campers every step of the way along the 26.2 miles.”

USES is proud to be an official non-profit partner with John Hancock for the 2016 Boston Marathon.

About Camp Hale
For 116 years, United South End Settlements’ Camp Hale, located on Squam Lake, NH, has been a retreat for urban youth who want an outdoor experience in a safe setting. Though traditionally an all-boys camp, in 2012 USES expanded programming and now offers a 13 day Girls’ Camp. Campers engage in activities such as canoeing, swimming, archery, hiking, fishing, ecology, and camping. The 190+ participants range in age from 6 to 16 and 58% of them come from low-income families. Camp Hale operates on the belief that at-risk youth will benefit from challenging opportunities for physical, mental, and social growth and development. The goal of Camp Hale is for each camper to leave camp with an improved sense of well being, social skills and awareness of personal potential. Ultimately, USES seeks to ensure that these benefits stay with them well into the future and yield improvements in other endeavors such as school, work, sports, conflict resolution, and interpersonal relationships.

About United South End Settlements
Originally founded as South End House in 1891, USES was the first settlement house in Boston and the fourth in the United States. Today, USES is fulfilling its commitment to equality and opportunity through our innovative, holistic model which seeks to strengthen and improve the academic achievement, economic security, and personal well-being of individuals and families across the lifespan. USES is a community of neighbors helping neighbors, an inclusive space where people from all backgrounds come together, solve problems, and learn from one another.