Call for Photography: Shut It Down Exhibit 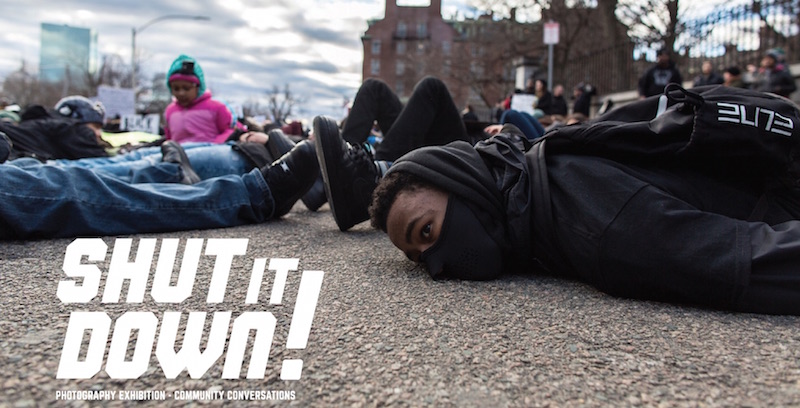 Over the last few years the Black Lives Matter activist movement has attained an enormous impact across the nation. Following the murders of Trayvon Martin, Eric Garner and Tamir Rice as well as the acquittal of the perpetrators, cities across the United States experienced a resurgence of protests and calls to demolish institutionalized racism.

Embedded in this context, Boston experienced a distinct heightening of actions between the summer of 2014 and winter of 2015 with thousands participating in rallies, marches and die-ins. The chants “I can’t breathe!”, “Hands up don’t shoot!”, and “Shut it down!” were heard across various neighborhoods almost on a daily basis during December 2014. It was a time when new leaders and organizations emerged and the city experienced new energy in activism.

Shut it Down! is a collection various photographers documenting this energy and its manifestations throughout the city. Throughout the duration of the exhibition curators will be inviting community partners to facilitate conversations with respect to the content of the exhibition and the work each group engages in.

Mission Gallery and Leonardo March are collaborating in organizing Shut It Down!, a photography exhibition and community event held at United South End Settlements’ Harriet Tubman Gallery in Boston, MA during April and May of 2016.

Shut It Down! is looking for photojournalistic or documentary style photography that captured activism energy in the Greater Boston area, related to ‘black lives matter’ actions in the between spring 2014 and summer 2015. When submitting images please consider the diversity in actions including protests, marches, rallies, die-ins, speakouts, trainings, community conversations, and creative actions. Also, consider a variety of compositions.

In order to enter this open call please send the following to both info@missiongallery.org and info@mneyid.com by February 29th, 2016:

•  Selection of 5-10 photos
•  Each file should be named: yourlastname_1.jpg, yourlastname_2.jpg, etc.
•  List with date and event where each photo was shot
•  Brief description of self and your work

If any of your images are selected, you’ll be notified by March 11, 2016. Funding for printing and framing will be provided by organizers.