At USES, we offer programs that support the whole family in achieving economic mobility. We help parents and caregivers develop their own capacity to reach their goals, increase their income and assets, and connect with new networks of people through One-on-One Coaching combined with opportunities for personal development through Family Mobility programming. For children and youth, we provide quality education and enrichment opportunities that foster personal development and social-emotional skills such as perseverance, communication, teamwork, and problem-solving – Early Childhood Education, club48 out of school time programming, and Camp Hale on Squam Lake in New Hampshire. We believe that as families increase their income and assets, become more resilient and connect to a diverse network, they and their children are more likely to develop the necessary skills to disrupt the cycle of poverty. 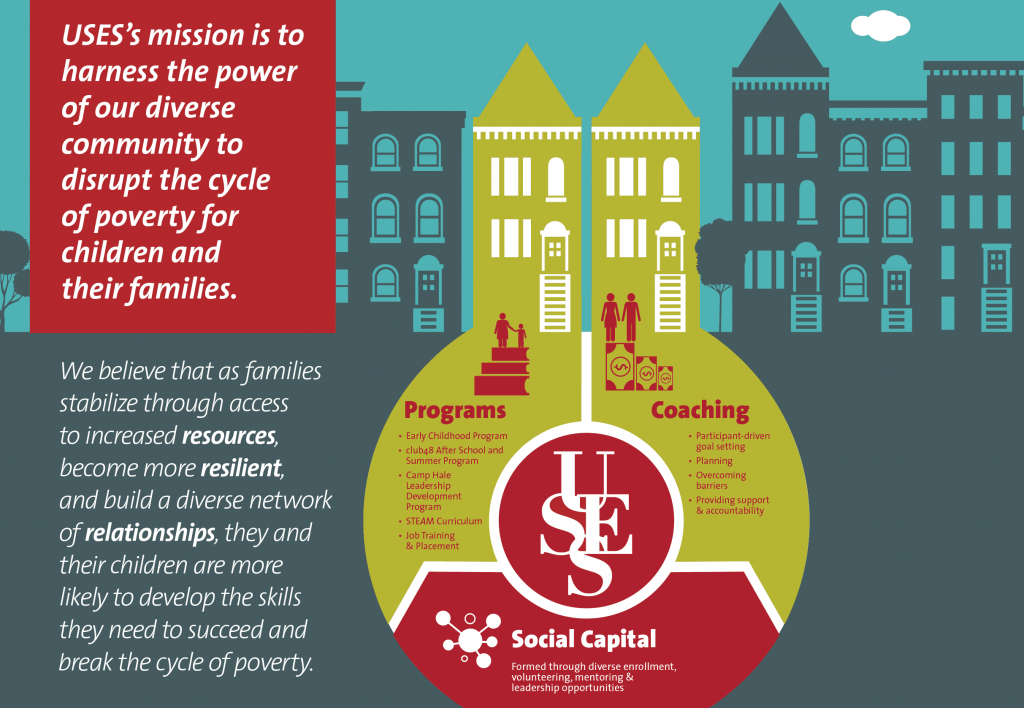 United South End Settlements (USES) opened its doors in 1892 as the Andover House, the first settlement house in Boston. The 1890s saw incredible change in the South End and in Boston. Emancipated slaves, new European and Asian immigrants, and rural laborers flocked to big cities in search of work, freedom, and opportunities. Many found poverty, bad housing, and fierce prejudice. To address these problems, a new form of engagement emerged: the Settlement House. The founding principle of these organizations was to provide college-aged, upper-class men and women with opportunities to live in impoverished neighborhoods and partner with residents in order to lift their neighbors out of poverty by strengthening families and building community.

Historically one of the poorest neighborhoods in Boston, the South End deteriorated rapidly after World War II due to “redlining” and urban renewal. Despite its poverty, the South End was a wonderful place to live. Children who grew up during this time fondly remember the corner stores, their neighbors, and the great sense of community in this uniquely multi-racial neighborhood. Post-World War II, the Settlement Houses addressed their community’s increasing distress and decreasing resources by consolidating five houses into one, United South End Settlements, in 1959.

As United South End Settlements celebrates its 125th year and beyond, we are now reaffirming our founding vision of an inclusive community where neighbors from all walks of life work together so that all can thrive, while implementing a bold, new model designed to promote economic mobility and social capital to break the generational cycle of poverty.